Q: Mouse pointer is not visible while installing Linux Mint 20.1

A: First you have to open a terminal with keyboard only in your Mint console. Then run the following commands:

Q: When I update the flexVDI Guest Tools, it sometimes complaints about not being able to install the flexvdi-guest-agent.exe file

A: The previous version of the service is taking some extra time to stop, just push the "Retry" button.

A: In these systems the unattended installer can fail when it finds a problem with a windows registry entry. The error message shown is "Windows could not finish configuring the system" (or "Windows no puede finalizar la configuración del sistema" in spanish systems). After clicking "OK", the system reboots to show the error message again.

One of the possible causes is a registry entry with a size over 8KB:

To solve this, update windows to SP1 or install the following Microsoft hotfix before running sysprep:

If it does not solve the problem, the registry entry (or more generally the error cause) can be found following these steps:

A: This problem is caused by a bug in the keyboard device driver, and can appear in virtual, as well as in physical machines. To solve it, you just have to change a registry key as shown in the text below (extracted from:  http://keyliner.blogspot.se/2009/11/windows-7-slow-keyboard-response.html)

For desktop computers, there is a PS/2 DIN keyboard bug in Vista and Windows 7 that was originally fixed with a registry change. When Microsoft released Windows automatic update KB977074, the registry change broke and then alternately worked, depending on subsequent Microsoft updates. This is the fix that I am currently running and this resolved my keyboard-speed problem.

Update: Recent Microsoft patches in late April, 2010 or early May, 2010, and again in June, 2010, have done and then undone the changes recommended in this registry hack. I have now switched this solution one way or the other on three separate occasions; each time it fixed the problem. Since June, 2010, it has been solid. Read below for more details.

a. Start, Run, "Regedit"
If the RUN command is not visible, see this link.

b. Tunnel to this key:
Hkey_LocalMachine/System/CurrentControlSet/Services/i8042prt/Parameters

c. On the detail side, "other-mouse-click" a blank area and add a new Dword-32 value. Name the key "PollStatusIterations" (no quotes)

Caution, there are other registry keys with similar names.

e. If this value is already in the Registry, disable the key by renaming it to "xxPollStatusIterations" (Other-mouse-click, Rename). Reboot and test.

Reason: Depending on which MS patch has been applied, this registry change can re-introduce a slow keyboard problem. You will have to experiment with adding or removing this patch. I've switched this value on or (x) off three times. This is unfortunate. But in each case, it has dramatically fixed scrolling problems. 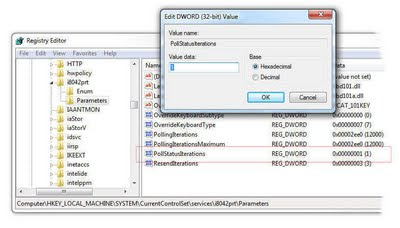 Clearly, Microsoft is having troubles in this area. Expect to return to this value as Microsoft continues to work on this.

Q: A guest cannot be run because the user and group of one of the disk images or ISOs cannot be set

A: Guests are usually run as unprivileged user and group "qemu", to avoid security problems. As a result, libvirt automatically changes the ownership of disk images to this user to ensure that they can be read and written. Trying to run a Guest will fail if the ownership cannot be changed for any reason. In that case, you can modify the file /etc/libvirt/qemu.conf to change this behavior:

Q: In Ubuntu, the Spice VDAgent is running but copy&paste, resolution change, etc. are not working

A: It is a problem with systemd-login integration, you must disable it. Create a file named /etc/default/spice-vdagentd with the following content:

Then restart the service with 'systemctl restart spice-vdagentd'.

Q: USB redirection is not working.